When the #metoo hashtag started, I was a little nervous. I almost didn’t participate. There were so many stories of being sexually harassed or assaulted that I could choose from. I did end up telling the story that impacted me most, the reason I stopped taking public transportation alone. Here is a copy of that post (apologies for typos in said post): 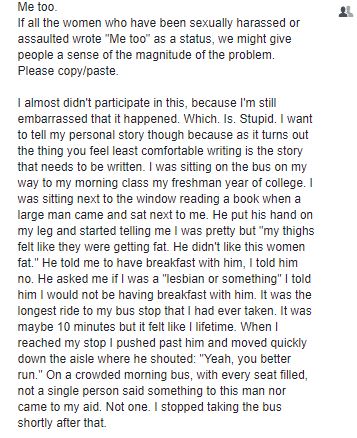 It terrified me to publically admit that. I had always felt ashamed of that particular moment, even though I literally had done nothing wrong. And that was just one incident, one incident that paled in comparison to other stories that were shared. And yet, it took me over 10 years to tell that to anyone.

The #metoo movement started in October and there are still rippling effects. Every day someone in the public eye is brought forth because of inappropriate, even lewd behavior. So naturally, it has been labeled as a witch hunt by those who hate it most.  But I disagree. I think it has been a hard pill to swallow because a lot of people who have been called out are beloved actors. But if I think back on my own experience there are people I have worked with and still consider friends that said or did some questionable things. Things that absolutely made me uncomfortable and that had an HR rep heard they would have gotten in trouble. I think we ALL men and women have said or done things that have made people uncomfortable but I truly believe it is about intent and the willingness to stop a behavior.

Now, as I’m writing this I’m fully aware that I’m probably going to piss off everyone. I ride the line a little on this one. I know that some of the men I worked with would have stopped if I said: “Hey that makes me feel uncomfortable.” I think it starts getting into the area of sexual harassment or assault if the person minimizes your feelings or ignores your requests. Like in my story about the bus, had I told that man “no” the first time and he had dropped it, I probably would not have been as affected by the situation. It was the brazen, continued attempts after saying “no” that made it feel like a horrifying situation.

I think that message gets muddled when we see quick new highlights and people assume that Matt Lauer just made one off-color joke to a female employee and got fired. No, there were probably several situations and multiple women, some of which have not come forth. No HR department would make that public and bold of a mistake as to fire someone without evidence or as some people on social media were saying that the system had become “guilty until proven innocent.” We only get snippets of stories because 1.) It really isn’t our business and 2.) These people are employees and still have rights and confidentiality agreements.

I think people who believe that it is a “witch hunt” are taking the stance because they have not considered this. I also think these people have never really experienced their own sexual harassment or at least faced it. They do not understand that it is not a fun thing to report someone, it does not make someone feel good about themselves and it certainly is not the kind of attention any person wants.

I will say I do not doubt that there are some bad apples out there who do say things for attention and those people give all the other brave people a bad name. That I think is unfair. I think the majority of people who report sexual assault are doing it because they have had enough. I think we are finally moving in a direction that makes it safe to talk about incidents, even 10 years after the fact. I think we need to stop minimizing people’s stories to protect those accused. We need to educate ourselves on our role in which sexual assault was ever made to be ok. I highly recommend the documentary The Mask You Live In on Netflix.

My main point is this: We all have a different life story to tell, our lives have been shaped by different events. It is not our job to retell or minimize someone’s story, but to try to understand it the best we can. That it what I think the #metoo movement has always been about, empowering people to tell their stories and try to be understood by those have never experienced sexual harassment and assault.